Whistling backstage brought back luck. The guilty party was obliged to leave the dressing room, turn round three times, knock on the dressing room door and when given permission, re-enter the room. There were variations on this routine including using a swear word to get back into the room or when back in the room.

With so much to learn for each production, it was usual to go through your ‘lines’ before going to sleep. It was supposed to sink in while you were asleep. The superstition was to put the script under your pillow after studying it. It helped the memorising of the words. 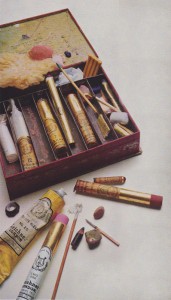 It was unlucky to clean out your make-up box when you were out of work. You only did that when you were actually in ‘a shop’ (an old theatrical term for being in work).

At the end of a performance, when the audience had left, the House Tabs were opened. If you left them closed overnight, they wouldn’t open again.

In rehearsal, it was unlucky to say the last line of the last act. ‘The tag’.  Some of the old melodramas used the title of the play as the last line. So instead of saying ‘blah-blah-blah’ to avoid the actual closing line, the actor would say something like “ and we shall never forget – the name on the bill”.

It was unlucky to mention by name or quote from ‘Shakespeare’s play about the Scottish King’. This was general throughout the business. The logical explanation for this superstition could be  based on facts. The play involves sets with a lot of steps and rostra (platforms) with shadows created by low dramatic lighting. Most of the performers carry and use swords and daggers while negotiating the shadowy sets. By the law of averages this would involve a larger than usual number of accidents which in time would become the basis of the superstition.