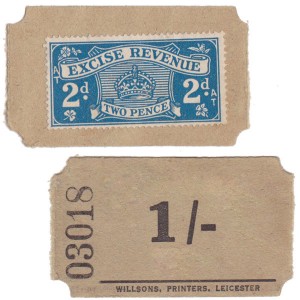 A tax on all forms of entertainment was created in 1916 during World War I (1914-1918) to fund the war effort. It should have been repealed in 1919. It wasn’t removed until 1960. Usually referred to as  ‘Entertainment Tax’ it was officially ‘Excise Revenue’.

There was more than one way of collecting the tax. In smaller venues (it also applied to cinemas, dance halls, sporting events and circuses) tax stamps had to be bought at a Post Office and stuck on the back of the admission tickets. Normally roll tickets were used.  When a ticket was handed to the customer, he or she was shown to their seat and the ticket torn in half. This cancelled the stamp and prevented its reuse.

During the life of the Kinloch Players the price of seats varied. In the 1940’s seats were seldom more than 1s-6d when the tax would have been 1d or 2d. By 1950 it seems that concessions were made and a 1/- ticket was free of tax and a 1/6d ticket had to have a 1d stamp. A 3/- ticket would have needed a 4d stamp. Sometimes the rates changed, presumably announced in the Budget. There was also a ‘full rate’ and a ‘reduced rate’.  Seventy years on it is difficult to be precise.

The stamps were bought in sheets or parts of a sheet similar in form to postage stamps. This was a tax that had to be paid before the money was earned. To managements running on a shoestring, especially during the war, this could be difficult.

There was a bit of sleight-of-hand  that could be used to preserve the stamp for reuse. The person tearing the ticket would palm a previously torn half ticket and switch it for the complete one, thus retaining the complete ticket for resale. Inspectors occasionally visited performances and watched for the switch then checked the number of tickets sold and their serial numbers. The inspectors were not ‘regulars’ and were seldom known to the managements. The Kinloch Players didn’t take the risk.