The play ‘Jamie Fleeman, the Laird of Udny’s fool’ was first included in the Kinloch Players’ repertoire in 1950. The existence of the story and the fact that at some time in the past it had been performed by a similar company or companies, first came to the notice of Henry Parker Junr. (Larry Parker) when the Kinloch Players were working in the New Deer/Old Deer area of Buchan.  The legend of Jamie Fleeman was well known and many people could quote lines and anecdotes relating to the famous local character. Because there was such a strong oral tradition in existence about Jamie Fleeman, it seemed obvious that the subject was commercially interesting.

A booklet had been produced (date unknown) which included some details of Jamie Fleeman’s life and humourous ‘quotations’. Henry Parker Junr. was lent a copy of this booklet and some of the information was used in the script. Other anecdotes were collected orally. Unfortunately a photocopy of the booklet was not made and kept, as the process was not generally available at that time. 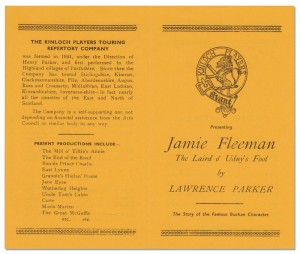 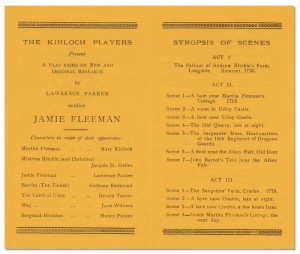 Some of the lines attributed to Jamie Fleeman were clearly ‘gags’ and were similar to those used by Daft Jamie in the melodrama version of Burke and Hare. This suggests that fit-up companies were using this material and switching it between the two characters when touring in the North East. This material was not used by the Kinloch Players in Jamie Fleeman as they were already using it in their version of Burke and Hare, which was always in their repertoire.

Jamie Fleeman was produced by the Kinloch Players in 1950 and did excellent business wherever it was played in Buchan. When Henry Parker Junr. left the company in September 1950 to join Perth Rep. the part of Jamie was taken over by Henry Parker Senr.