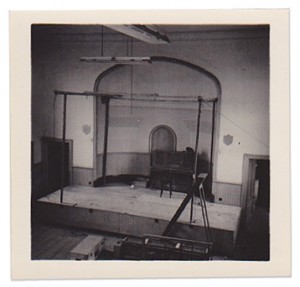 The fit-up used by the Kinloch Players consisted of 2”x”2 timber, usually about six feet long, which was bolted together with carriage bolts. The frame on which the curtains and scenery were hung consisted of a ‘goalpost’ at the front of the stage and another at the back. The two goalposts were joined by side struts. Thus a box was formed, and was made stable by ropes attached to the four corner joints and tied to whatever points were available to secure the frame in an upright position. Sometimes screweyes  were inserted in any wooden beams or panels that were available around the existing platform area and used to secure the ropes. This was unpopular with hall keepers.

There were no flats or conventional cloths rolled on battens. The wings consisted of curtains (in a dark neutral colour) hung on the side struts and the house tabs and front cloth/curtain were hung on ropes strung across the stage from one side strut to the other. The scenery consisted of canvas cloths with curtain rings along the top edge, which were hung on ropes between the side struts, well upstage. The cloth was painted on both sides and when first hung was fairly bulky because of the size mixed with the paint. They gradually became more pliable until the paint eventually flaked off, when they would be washed and returned to the scenic artist for repainting.  Among the scenes used were :- 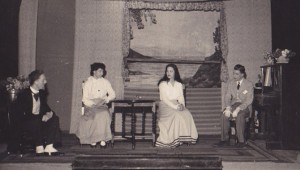 Cloths like the Street, the Garden and the Wood were used in several shows. The cloths were sent away and painted by a scenic artist in Blackpool (Bernisconi ?).

Interiors were mostly represented by full length curtains in plain or fancy designs according to whether they were posh, homely, etc.  There was a full size black backcloth used for dungeons, prison cells and other dark and nondescript locations. It was made originally out of wartime blackout material. 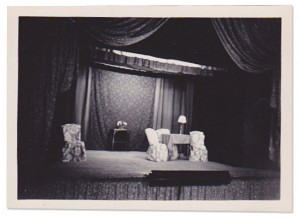 Table and chair covers, plain or chinz for ‘posh’, were used to disguise card tables and ordinary kitchen chairs. A brass table lamp with a shade was also ‘posh’. Two card tables with a long draped cloth and four brass candlesticks and a cross was a church alter for ‘In a monastery garden’. A low bench with the same cover became a bier for the sleeping Snow White. 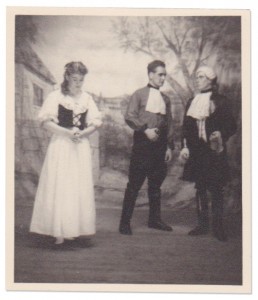 In the traditional plays, Maria Marten, etc., a ‘full set’ would usually be followed by a ‘frontcloth’. This was a set of curtains set about four feet back from the ‘housetabs’. The ‘frontcloth’ or ‘Number Twos’ were completely plain and could represent any location, interior or exterior. If necessary the text would set the location.  Curtain rings attached to the top of the curtains and threaded through rope allowed them to be opened and closed by a simple system of drawstrings.

In the company’s early years the lighting consisted of simple battens of wood with lamp holders, in two circuits, one with the main lighting, the second with coloured bulbs. Around 1943 a simple liquid dimmer was made and used successfully. By 1946 three standard dimmers were bought from Strand Electric and in 1948 professional battens able to take coloured ‘gellies’ were added. There was a front batten immediately behind the house tabs, one upstage to light the backcloth and footlights. On rare occasions, in the early days in the more remote halls there was no electricity. Oil lamps were used, shaded from the audience by sheets of tin which also acted as reflectors. Tilley lamps and Alladin lamps were  more powerful, but harsh, versions of oil lighting. 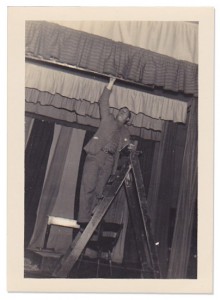 In the late forties and early fifties the Perth Theatre Company toured the Highlands and Islands in the Summer, when their theatre had a resident ‘Summer Show’, a revue presented by a different management. They also sent out a Spring Tour to the Orkney and Shetland Islands. A winter tour of ‘The Hasty Heart’ based  in Perth in the early 1950’s was a one-off. The cast included Edward Woodward, Gordon Jackson and the author of this website. They used small versions of theatre sets with flats, etc. Technically they toured and fitted up their scenery in town and village halls, but they would have been insulted if anyone had referred to them as a ‘fit-up’.